About The OLED Chemicals: How Much Do You Know?

What will be your first consideration when you are going to buy a new digital device? The CUP or RAM grade for the computer or the cellphones? Or whether smartphones can take better photos? Or does the screen display quality of the images and videos for your designing work? This post will mainly discuss how the OLED chemicals relate to the screen display quality. Let’s dive in.

What is OLED meaning?

Well, OLED stands for the Organic Light-Emitting Diode. It is a technology that uses LEDs in the light, which are from organic molecules. OLED is now the world’s best display panel. Most people want to build a home entertainment system; before the OLED, people prefer to choose the 4K LED displays. But now they are choosing the 4K OLED displays. Want to know more about the OLED vs. 4K? You can go to LG explanation here.

What is the difference between OLED and led?

The first OLED product came out in 1997, and the inventor is Steven Van Slyke from the US. For now, OLED can replace the work of all the LED or LCDs. The OLED colors are brighter than the LED or LCD. It is because of their working principle difference, and you can check the below image for the details. 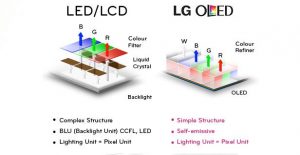 As you can see in the above image, the LED LCD screens use a backlight to illuminate their pixels. At the same time, OLED’s pixels can produce their light. You can also know their difference from the way they are illuminating the pixels. The OLED pixels way are emissive, and the LCD is transmissive.

Knowing the above working principle difference between the OLED and LED or LCD, now you can understand the OLED advantages since OLED pixels can generate light themselves. So the OLED displays are brighter, and the colors or images are clearer than LCD.

As a result, more and more companies are using the OLED on their product, such as television screens, computer monitors, and portable systems such as smartphones and handheld game consoles. And the Apple Super Renta and the Super Renta XDR are using OLED technology to enable an incredible viewing experience. Check more details here.

What chemicals are used in OLED?

Below the image are the details of the OLED layer; the OLED chemicals are in the emissive layer. It is a film of organic compound that emits light in response to an electric current. 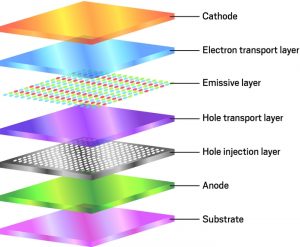 The molecules commonly in OLEDs include organometallic chelates, for example, the Alq3, fluorescent and phosphorescent dyes, and conjugated dendrimers. 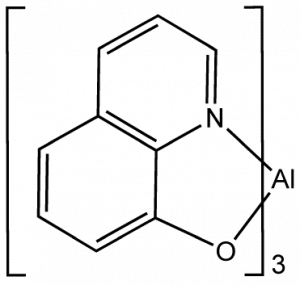 Our company Daken Chem is a professional electronic chemicals supplier in China since 1983. With about 38 years of development, we have built our R&D team of Doctors and Masters. And also we have cooperations with our country’s famous Zhengzhou University.

If you are looking for an OLED chemicals supplier, don’t hesitate to contact us via the below contact form, we will get back to you within 24 hours.

The Electronic Chemicals Types You Should Know

Semiconductor Chemical Suppliers: Things You Should