According to research, the global smart glass market was valued at USD 3.89 billion in 2020 and is predicted to increase at a compound annual growth rate of 12.5% from 2021 to 2026, to reach USD 7.96 billion by 2026. Our company Dakenchem is a professional PDLC film synthesis supplier in China, check this post to know more about PDLC films. 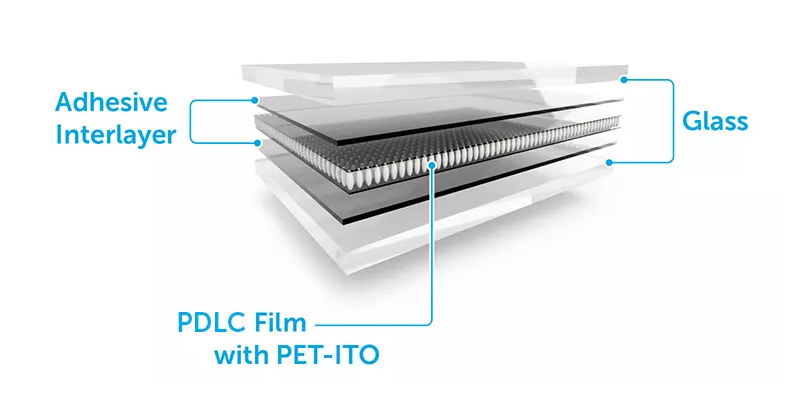 Between 2014 and 2021, significant progress was made in the preparation, characteristics, and applications of Polymer Dispersed Liquid Crystal (PDLC) composite films.

These films are three-dimensional structures made from liquid crystal micro drops embedded in a polymer matrix. Due to the random orientation of LC droplets in the polymer matrix, these films have a milky white scattering state in general. The film turns transparent when an electric field of appropriate strength is introduced.

Why PDLC films are welcomed by the market demand?

Because of their unique property of electrically controlled switching, PDLCs have piqued interest. PDLC modification, molecular structure optimization of monomers and liquid crystals, and doping of nanoparticles and dyes are some approaches that were made to overcome some obstacles of these films.

PDLC composite films promise to promote and expand the development of next-generation smart windows, displays, wearable devices, and sensors due to their ease of preparation, cost-efficiency, large-area manufacture, and pliability.
What products do the PDLC films are applied to?

PDLCs have also been employed in the interiors of cars and, more recently, airplanes as well.

A polarization-dependent (Micro lenticular lens array) MLA device is another key application of PDLCs. When the polarized 2D image arrays met the microlens, this device was employed to realize a 3D image.

How to synthesis the PDLC films with chemicals?

To create PDLCs, encapsulation and phase separation can be used. Each method produces PDLCs with unique properties and characteristics. The size and morphology (shape) of the droplets, as well as the cooling and heating speeds used during production and the types of polymers and liquid crystal used, all have an impact on the PDLC material’s properties.
Microencapsulation was used in early attempts to create PDLCs.

A homogeneous mixture of polymer (or prepolymer) and liquid crystal must first be generated to produce PDLCs through phase separation. Liquid crystal droplets develop as the two phases separate. The three most common phase separating methods are as follows.

This method occurs when LC is mixed with a polymer at high temperatures, then the mixture is allowed to cool at a certain rate to give rise to phase separation, and the LC domains form as the polymer hardens.

Both the LC and the polymer are dissolved in the same solvent for this process. Phase separation occurs when the solvent evaporates at a certain pace.

What chemicals are used in the PDLC synthesis

PDLC films can be made by photopolymerizing mono- and di-functional acrylate monomers in nematic liquid crystal combination E7. The components of this combination are 5CB (CAS NO. 40817-08-1), 7CB (CAS NO. 41122-71-8), 80CB, and 5CT (CAS NO. 54211-46-0).
(Meth)acrylate monomers are usually used to form PDLC films by UV-polymerization. In the flexible (meth)acrylate monomers, the modulation of morphology and electro-optical characteristics is limited. As a result, certain unique structures such as hydroxy, branching methylene/methyl, phenyl, epoxy, cyclic methylene, and bisphenol were introduced into typical acrylates.
Our company, Dakenchem is a well-known PDLC Film Synthesis Supplier in China.