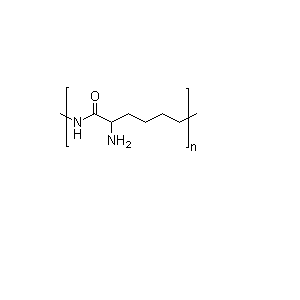 ε-Polylysine （also ε-Poly-L-lysine，ε-PL for short）is a naturally produced, cationic homopolymer of 25-30 L-lysine（due to Streptomyces albulus fermentation.), which was connected by ε-amido bond compounded by a e-amido of l-lysine and a e-carboxyl of another l-lysine. ε-PL was first discovered by Japanese scientist.
Send Inquiry
Product Features

ε-Polylysine can greatly inhibit the growth of bacteria, yeasts and moulds bacteria, especially to the Gram+ bacteria which can’t easily inhibit by others. As a good preservative, ε-PL is characterized as being high safety, water-soluble, stable at high temperatures, widely usage, non prejudice to the taste, antibacterial in neutral or subacidity conditions. Because of the stability at high temperatures, it can inhibit some heat-resistant bacillus after heat treatment and some tadpole-form no contractile siphovirus bacteriophage as well.

As can be seen, ε-PL has wide range of antimicrobial spectrum with minimum inhibitory concentration of bacteria less than 100μg/ml, and to Fungi, the MIC is higher.

ε-PL is in high aggregation state of multivalent cations, which can damage the cell membrane structure of microorganisms, causing cell material, energy and information transmission interrupted. Its combination with the ribosomes within the cell affects the synthesis of biological macromolecules, eventually leading to cell death.

It had been approved by FDA for use as an antimicrobial agent in cooked rice or sushi rice at levels up to 50 milligrams per kilogram (mg/kg) of rice. The results of an acute toxicity study and bacterial assays for mutagenicity show that ε-Polylysine was non-toxic and there was no evidence for mutagenic activity of ε-Polylysine. So ε-Polylysine is absolutely safe to be used as food preservative.

With features of solubility in water, good heat tolerance and extensive antimicrobial against fungi, ε- PL can be used under various conditions. A test for thermal stability and pH test using scope of ε-PL was carried out and the results are shown in Table 2 and Table 3

No Influence on Food Flavor

As a food preservative, ε-PL does not affect food flavor.  When added to food, ε-PL and dextran will have Maillard reaction after high temperature disinfecting because of its excellent

heat-resistance property. Not only can it maintain the effectiveness of antimicrobial, but also it has strong emulsifying properties, which is unacted whether the food is under circumstances of PH7 or 1 mol/L NaCl. Therefore, ε-PL as food additive has a dual function of emulsification

The most prominent feature in ε-PL is its use as food preservative in meat, poultry, marine products, bread, biscuits and any other kinds of food. ε-PL is in line with consumers’ health demands as natural and safe preservative.

Except single use, ε-PL can mix with other additives like aminoacetic acid, vinegar, ethanol, vitamine, glycine, Twelve amino Acid thiamine, etc, which greatly improves the preservative ability. You may confect the ε-Polylysine with the food and mix fully or Spray ε-Polylysine directly onto the surface of food. Both of the methods are proved to have conspicuous  antibiotic action and preservative effects in killing or inhibiting the pathogenic microorganism in food or on food surface.

In 1989, Japan added ε-Polylysine to its national annexing agent catalogue listing as natural additive for foodstuff and allow its use. Following Closely, Korea allowed its use as food additive. In US and Europe, the frequently-used preservatives sorbic acid, and in July, 2003, ε-Polylysine was officially recognized as safe as food preservative by FDA with GRAS Notice No. GRN000135.

Besides, ε-PL can be used as washing and sterilizing agent in food machinery and container for food processing enterprises.

The cosmetics are vulnerable to the pollution caused by microbe and easily go bad in storage and use process. Currently, the most effective way to avoid the bad effect on Human Skin caused by the alterative cosmetics and deterioration and mustiness of other products is to add Preservatives.

Due to its extensive bactericidal performance, ε-PL has a wide range of applications in cosmetic and its application range will further expand because of its safety. Currently, our products are used in cosmetic companies in Korea, Italy and USA with remarkable effect. The Korea Company tested our products and the result of bacteriostatic effect is as follows:

Most Daily Health Products，like toothpaste, gargle, soap, hand washing, Moist Wipes as well as cleaner & disinfectant fluid used in kitchen, have sterilizing and bacteriostatic effect. ε-PL is just kind of safe, environmentally friendly, efficient and broad-spectrum bactericide which has wide application space for the Daily Products industry. It is currently reported by mass data that ε-PL has prominent effect in treating the infection of Helicobacter pylori in oral cavity.

ε-PL is an effective disinfectant against a wide range of micro-organisms, especially having bacteriostatic effect on the common Escherichia coli, staphylococcus aureus, pseudomonas aeruginosa, bacillus subtilis, Saccharomyces cerevisiae and mould， etc. As daily Bacteriostatic Agent, ε-PL is both safe and environmentally friendly.